Hi everyone, we are beginning our fifth topic of this eating disorder series.  This time will be discussing one of the newest eating disorders to join the diagnostic manual.  In 2013, Binge Eating Disorder was created and provided with it’s own category instead of being categorized as an unspecified eating disorder.  This has become one of the most predominant disorders, and treatment centers are expanding their teams and education to include programs that specifically target this disorder.  Let’s take a look at what falls under this disorder based on the diagnostic criteria:

As discussed in other entries, a diagnostic criterion is not solely needed for someone to be struggling with a disorder.  Other behaviors and or emotional changes are a significant indicator of a person struggling.  Due to binge eating disorder having a stigma around it, most people that engage in it will keep it a secret. It can be challenging to diagnose unless the person is honest with a support person or is viewed engaging in the episodes. Some changes to look for include a person being uncomfortable eating around others, or large amounts of food missing.  A person might also try to hide wrappers and/or containers as a way to keep it discrete.  Some who believe that others will know if food goes missing, will purchase their own and keep it in a hidden place.  Due to the hidden food, people might work their schedules or routines around trying to keep their episodes secret.   With binge eating occurring, there might be other erratic eating patterns (i.e. no eating schedule, not preparing meals, not grocery shopping consistently). As with any eating disorder, food rituals and table behaviors can be present.  For example, a person might not allow their food to touch or might choose specific food groups.

Physical changes will also exist as well.  Since there is extreme eating associated with this disorder, extreme weight fluctuations can occur.  People will drastically change weight in small periods of time. Due to the inconsistency in eating schedule, there might be GI difficulties present. Lastly, those struggling with this disorder are trying to look for balance, and might be more prone to trying every fad diet that is within our culture. 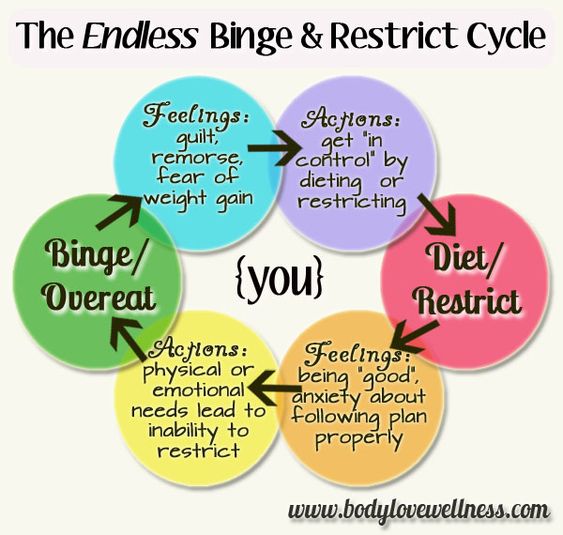 Despite this disorder being newer in terms of diagnosis and insurance coverage, there are treatment centers that have a specific evidence based approach to managing the symptoms are working towards lifelong recovery.  Eating Recovery Center has locations all throughout the country, and some local here to Chicago.  They specialize in adult Binge Eating through using DBT, CBT, ACT, and exposure therapies incorporating them into different levels of mental health care.

Please visit www.nationaleatingdisorders.org for more information about this specific disorder or www.eatingrecoverycenter.com for additional treatment information.

Bulimia Nervosa How are we handling our children’s dysregulated behavior?

The All Foods Fit Model to Prevent Disordered Eating